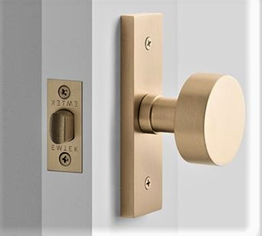 Many infections can be spread by doorknobs.

Keep this in mind especially nowadays.

Brass doorknobs disinfect themselves in about eight hours, while stainless steel and aluminum
knobs never do. Unvarnished brass doorknobs therefore tend to be more sanitary than stainless or
aluminum doorknobs. The effect is important in hospitals, and useful in any building.

some  references: KCET: “ if you’re worried about bacteria, here’s some interesting trivia: brass and copper doorknobs actually impede bacterial growth. It’s called the oligodynamic effect, and it’s the result of metal ions in brass and copper having a toxic effect on molds, spores, viruses, and other living cells. Unvarnished brass doorknobs magically disinfect themselves in about eight hours.”

Wikipedia : The material the door handle is made from can play a significant part in the growth of bacteria. That is the change in material can mean the difference between a handle that is riddled with microorganisms or bacteria free. One experiment conducted took both a stainless steel plate – which is what most door handles are currently made from – and a copper plate coating them both with 10 million cells each of MRSA. What they found was that bacteria thrived on the stainless steel plates while the natural antibacterial properties of copper worked both directly and indirectly to destroy the bacteria. “The direct effect comes from the release of copper ions which degrade the DNA of a cell and inhibit its respiration. The indirect effect is even more rapid. On a dry surface, copper interacts with the bacteria’s metabolism to generate very potent free radicals, which are even quicker than copper itself at destroying the DNA and inhibiting respiration.”[6] Tests have shown that copper is not only effective against superbugs like MRSA C difficile, but also other dangerous germs like the flu virus and E. coli.